How to hunt an Elephant 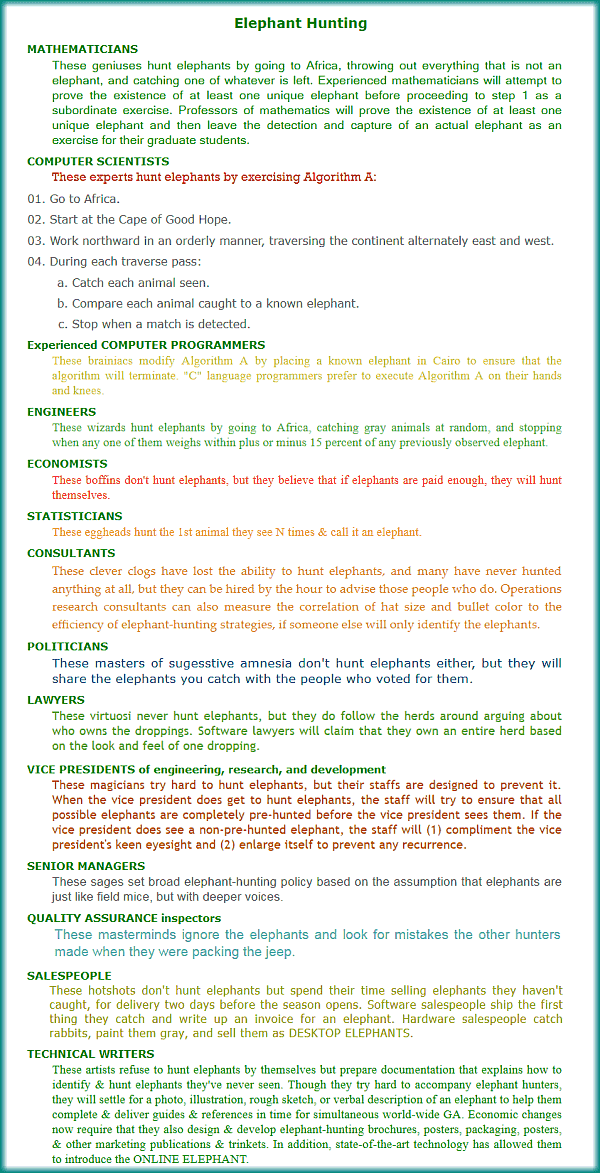 Over the years, the problem of finding the right person for the right job has consumed thousands of worker-years of research and millions of dollars in funding. This is particularly true for high-technology organizations where talent is scarce and expensive. Recently, however, years of detailed studies by the finest minds in the field of psychological interpersonal optimization have resulted in the development of a simple and fool proof test to determine the best match between personality and profession. Now, at last, people can be infallibly assigned to the jobs for which they are truly best suited.

The procedure is simple: Each subject is sent to Africa to hunt elephants.
Remark: Elephant hunting is a very challenging sport. The subjects to be tested are in for long days of tracking individual bulls or small groups of mature bull elephants.

However, the subsequent elephant-hunting behavior is observed and then categorized by comparison to the classification rules outlined below. The subject should be assigned to the general job classification that best matches the observed behavior.

These experts hunt elephants by exercising Algorithm A:

These brainiacs modify Algorithm A by placing a known elephant in Cairo to ensure that the algorithm will terminate. "C" language programmers prefer to execute Algorithm A on their hands and knees.

These wizards hunt elephants by going to Africa, catching gray animals at random, and stopping when any one of them weighs within plus or minus 15 percent of any previously observed elephant.

These boffins don't hunt elephants, but they believe that if elephants are paid enough, they will hunt themselves.

These eggheads hunt the 1st animal they see N times & call it an elephant.

These clever clogs have lost the ability to hunt elephants, and many have never hunted anything at all, but they can be hired by the hour to advise those people who do. Operations research consultants can also measure the correlation of hat size and bullet color to the efficiency of elephant-hunting strategies, if someone else will only identify the elephants.

These masters of sugesstive amnesia don't hunt elephants either, but they will share the elephants you catch with the people who voted for them.

These virtuosi never hunt elephants, but they do follow the herds around arguing about who owns the droppings. Software lawyers will claim that they own an entire herd based on the look and feel of one dropping.

These sages set broad elephant-hunting policy based on the assumption that elephants are just like field mice, but with deeper voices.

These masterminds ignore the elephants and look for mistakes the other hunters made when they were packing the jeep.

These hotshots don't hunt elephants but spend their time selling elephants they haven't caught, for delivery two days before the season opens. Software salespeople ship the first thing they catch and write up an invoice for an elephant. Hardware salespeople catch rabbits, paint them gray, and sell them as DESKTOP ELEPHANTS.

These artists refuse to hunt elephants by themselves but prepare documentation that explains how to identify & hunt elephants they've never seen. Though they try hard to accompany elephant hunters, they will settle for a photo, illustration, rough sketch, or verbal description of an elephant to help them complete & deliver guides & references in time for simultaneous world-wide GA. Economic changes now require that they also design & develop elephant-hunting brochures, posters, packaging, posters, & other marketing publications & trinkets. In addition, state-of-the-art technology has allowed them to introduce the ONLINE ELEPHANT.